#104 Could You Afford Your Chiropractic Care? 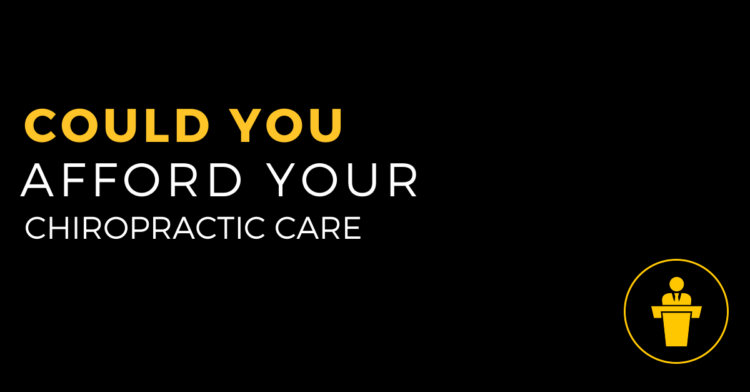 Could you afford your chiropractic care?

That’s a question I was once asked by a speaker from the stage and unfortunately the answer was “no”.

1. Others couldn’t afford chiropractic care either and worse…

2. It was my responsibility to make sure that they could.

Like most responsibilities in my life, I took this one seriously and if you’ve listened to this podcast the rest was history.

Years of good intentioned but very bad business decisions led to low revenues, non existent profits and more stress than I ever could have imagined I’d be able to handle.

Fast forward a decade (almost two) and exposure to the right people with correct thinking… life and practice are much better.

The goal of today’s podcast is to help you avoid the massive pitfall that destroyed my practice before it ever started and kept me fighting for my practice life for years.

What Is Third Paradigm Chiropractic?

It was used to describe the approach most chiropractors deliver to their families but restrict from their communities. 3PC focuses on checking for and correcting subluxations in ALL people regardless of age, infirmity, condition or symptom.

A 3PC practice includes no lasers, no orthotics, no ART, no essential oils, no therapeutic nutrition…it includes not a single intervention intended to “treat” a disease condition or alleviate symptoms.

Let me be extremely clear… EVERYTHING listed above is useful and helpful, IT’S JUST NOT CHIROPRACTIC!

Do you want your community to see you as an expert? Stop dabbling in everything and become the master of ONE thing.

Steve Jobs is a classic example.  After being let go from the company he founded, Jobs returned to Apple to famously ditch 103 products in development and reduce the company’s focus down to only three! The rest is history. These three products helped Apple become one of the most profitable businesses in the world.

The secret to success is in doing one thing and doing it so well that you just cannot be ignored.

3PC is built on the same idea. Learn to master time tested business principles and apply them in a contemporary way to subluxation detection and correction.  Avoid the need to position yourself as a natural pain relief or bandaid, and instead, lead people to understand and appreciate your UNIQUENESS and EXPERTISE.

Are still wondering “Will people pay for this approach?” “What about people who have symptoms or conditions?”

Your market is waiting for leadership. They are searching for a solution to a problem. Positioned properly, people with and without symptoms, will pay you for 3PC, refer others to your practice and embrace the benefits of caring for their spine and nervous system for a lifetime.

It’s hard to say whether this is the greatest time for chiropractic or not, but one thing is for sure…it could be the greatest time for your practice to become successful and make a long term impact.  It is time to stop playing second rate medical doctor and join the drive into The Third Paradigm.

Paradigm #1 holds that chiropractic cures all disease. This paradigm is in line with the advertisement which B.J. Palmer and D.D. Palmer ran in the Davenport Times in 1902 which proclaimed, “You have no right to be sick when chiropractic cures all disease.” Practitioners of this paradigm, though they are in truth few and far between would live by such slogans as, “The power that made the body heals the body.” They neglect to mention, however, that while it is true that the only power that heals the body is the power which made it, sometimes even that power can’t heal. Some people are beyond healing. The pretense that all sick people get well when properly adjusted merely holds us up to ridicule by intelligent people. Other similar slogans claim that “Chiropractic gets sick people well” without adding the necessary word, “sometimes” which would make it true. This latter slogan, incidentally, even if true, would offer chiropractic care to sick people only and deny it to those who are not yet sick by clinical or laboratory symptoms.

A second paradigm of chiropractic thinking and practice holds that only some sick people get better when their vertebral subluxations are corrected. Because of the nature of their disease, or the advanced stages of it, others require medical intervention or adjunctive therapy. This paradigm of treating some and referring others sounds logical and caring, and is most likely to earn us the respect of the community of health care providers. This paradigm represents the thinking of the vast majority of chiropractors.

Though there is disagreement how patients should be treated, when to refer, and which treatments to administer in the chiropractic office, the second paradigm is heartily subscribed to by the two largest national organizations. Since both organizations agree on this major issue, it makes one wonder why we have two separate major organizations. If they both agree to treat some diseases and refer others, what are they disagreeing about?

There is, of course, one slight problem that arises when deciding which patients and diseases to treat and which to refer: all treatment or referral decisions are dependent upon diagnosis. Diagnosis is the one great area of weakness in this practice paradigm. Diagnosis is, after all, the greatest challenge the area of greatest risk of mistakes being made. Yet chiropractors, who receive much less diagnostic training than MD’s think they are competent to diagnose for purposes of referral. How is this possible when they:

• Denied by law the use of all diagnostic methods that invade the body chemically or surgically;
• generally learn diagnosis out of textbooks without ever seeing cases of the diseases they purport to identify;
• frequently learn diagnosis from other chiropractors who also learned from textbooks and have never seen cases of the disease;
• often couldn’t pass national board exams in diagnosis without a crash course before the exam.

Some say that to practice without diagnosis would be dangerous. I suggest that nothing is more dangerous than incompetent diagnosis. Every year tens of thousands of sick people visit chiropractors of the second paradigm. People seeing chiropractors complain of a variety of problems, which could be the manifestation of vertebral subluxation, or could just as easily be symptomatic of something else, possibly a life-threatening disease. Instead of practicing chiropractic, the paradigm two chiropractor does a medical diagnostic exam, followed by a medical report of findings in which the DC claims to have identified the cause of the problem.

And with such blithe and dangerous comments as, “We do not treat the symptom, we correct the cause,” the DC proceeds to offer treatment, which delays medical care for what may be a life-threatening medical emergency.

Was the backache really caused by vertebral subluxation, or is it perhaps a manifestation of prostate cancer, kidney stones, or referred angina from an impending heart attack? Is that headache caused by subluxation or is there an aneurysm at the Circle of Willis, or a brain tumor causing the symptom? How good is the chiropractor’s diagnosis?

Another point to consider is that while thousands of people go to chiropractors every day, millions more stay subluxated because they have no symptoms. For over a 100 years we have exposed people to the limited understanding of chiropractic that results from paradigm two. The treatment of some diseases by adjustment and the referral of others based upon our diagnostic knowledge is not chiropractic at all, it is the practice of manipulative medicine, and it is even more dangerous than paradigm one.

Paradigm one is obviously stupid, so stupid that nobody really believes it. Nobody believes that all disease is caused by vertebral subluxation, so nobody gets hurt by it except the chiropractor who tries to make a living at it. Paradigm two, however, sounds logical. It is saleable and, subsequently, dangerous. If paradigm one is stupid, and paradigm two is dangerous, let us consider a third paradigm.

This paradigm make sense to me. It is a paradigm that thousands of chiropractors practice on their families, yet neglect to offer the public. Paradigm three is nether based upon the claim to cure all disease, nor an attempt to prejudge which diseases might be cured if vertebral subluxations are corrected. In fact, it has no disease treatment at all.

It is totally non-therapeutic in its intent and practice.

It does not matter if a subluxated person has a disease or if any disease would be best treated by manipulative medicine or some other treatment. The presence or absence of disease is irrelevant. Every human being, sick or well, newborn or aged, regardless of nutrition, exercise, occupation, sex, race, religion, and all other factors of life, is better off without vertebral subluxation. Why then do some chiropractors and organizations want to limit chiropractic correction of subluxations to certain categories? Is the person with AIDS or terminal cancer better off left subluxated? Should an infant with a vertebral subluxation but no determinable disease symptoms be left subluxated until symptoms occur? Symptoms are the last stages of malfunction, not the first.

By the time symptoms have occurred, years of opportunity for repair may have been lost. Why not correct vertebral subluxations when they occur, rather than wait for years of damage to produce symptoms?

To restrict chiropractic to sick people is as stupid as restricting vitamin C to people who have a cold. Furthermore, to treat disease by manipulation is necessarily to delay alternative treatment and thus, possibly endanger life.

The third paradigm of chiropractic practice is the only one that makes sense. It makes so much sense that thousands of chiropractors use it for themselves and their own families, yet because medical insurance does not pay for it, they do not teach its value to the public at large.

We live in a country that spends billions of dollars a year on the treatment of sickness and disease, but precious little on health. Our chiropractic profession is supposed to lead the world into a new and more intelligent way of thinking, not follow the mistakes of the past.

Paradigm three is not about health and sickness. It is about the recognition that vertebral subluxation causes more than just lost health potential and loss of every human potential. The nervous system is the coordinating system whereby the countless billions of body cells interact in harmony to express mind, body, spirit, emotion, artistic talent, speed, stamina, coordination, and family relations. Vertebral subluxation is a cause of disharmony to this beautiful thing we call life.

Paradigms one and two are about backaches; paradigm three is about life. We can choose to conform to the errors of the past, or we can step proudly to the forefront and lead the way into the future.